Alternative Energy Projects Company (AEPC)  one of the companies of the Kuwait Projects Company Group (KIPCO), has announced the signing of a contract with Kawar Investment Company- Jordan. The contract was signed in order to develop, implement and invest in an integrated solar energy plant equipped with a transit system via the electricity network for the benefit of telecommunications company Zain – Jordan. The signing of this contract reflects the endeavors of international companies to keep pace with developments in the energy field and to reduce their consumption and replace them with other clean and renewable sources such as solar and wind energy. This station aims to provide Zain-Jordan electric power needs from a renewable and environmentally friendly source. On this occasion, General Manager of AEPC Dr. Hassan Qassem stated: “Global warming is a real problem that threatens the world and the solution lies in reducing carbon dioxide emissions, the main cause of global warming, by replacing traditional carbon energy sources with renewable and environmentally friendly sources. The most important of which is solar energy”. With the decrease in the technical cost of solar energy, this clean source of energy has become a competitor, and even economically superior to the energy produced by traditional sources. Read more on alanba.com.kw 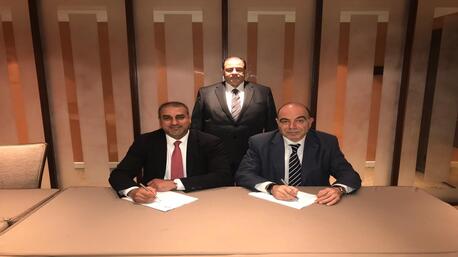